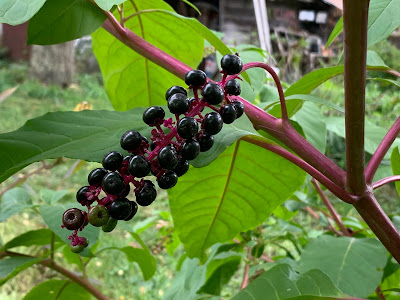 When we were at the Niagara Dufferin Island Nature Area in 2008, we gathered some Poke (Phytolacca americana) seeds to see how they would fare with climate change in Bishops Mills. This is a spectacular metres-high perennial broad-leaved herb, which produces spring shoots which used, before they were shown to contain a carcinogen, to be eaten in the spring as a North American analog of Asparagus.By 2011, the one surviving plant of a few initial seedlings was 2.5 m tall, and bearing fruit. The local Birds seemingly didn't need an introduction to the berries of this species, and take them as soon as they turn dark, likely contributing to the purple bird-splats that were on the pavement in front of the houses. In October 2013, something, either the winter or the previous summer's drought, had almost killed the plant, which was only 1 m high, with the first flowers opening. 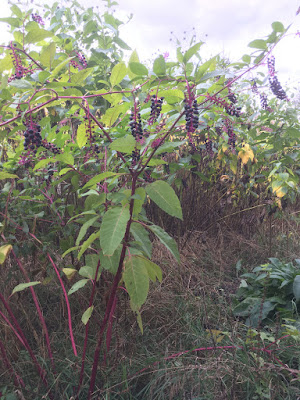 This suffered from the 2018 drought, along with the parent plant, which got a slow start because it had been covered by a blown-over piece of roofing metal.

But something about the winter of 2018-2019, with its severe cold wave caused by a weakened jet stream around the Arctic polar vortex, was fatal, and both plants died. The parent plant was reduced to "some segments of stems, and roots reduced to masses of fibre with some skin remaining in a few cases." 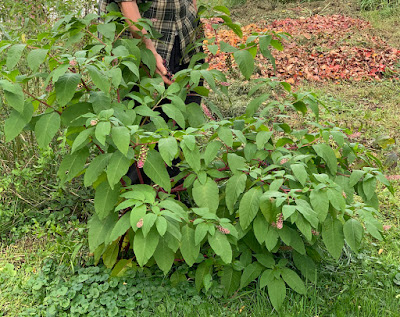 One seed had somehow germinated in the pot of a house plant, and we kept it alive over the summer of 2019, planted it out in the back yard in the fall, and were pleased to see a few tiny shoots this May. Through June it wilted from the drought despite being watered, but by 14 July it was 70 cm tall, and beginning to bloom. In August, even before the drought broke, we began to have little seedlings showing up all around the yards, from seeds which must have been from 2018 or before, but which hadn't germinated in 2019. Wikipedia says: "The seeds have long viability, able to germinate after many years in the soil."

It's possible that "Black Woolly Bear" caterpillars of the Giant Leopard Moth, Hypercompe scribonia, showed up here for the first time in 2018 because of the presence of Poke, though the species also feeds on a wide variety of other plants, and we did see one caterpillar in 2019 when the Poke was dead.

On 31 October this year's plants finally succumbed to -8°C frost. We had counted 26 seedlings around the yards, a few of which had flowered and set green berries, and we collected 20 fully-ripened racemes of berries from the overwintered plant. These seeds are twice inbred, but we're offering them for distribution to those who'd like to try this "towering, treelike plant with spreading bright magenta stems" (NY Times), and finger-staining intensely purple berries which are a popular food among many species of Birds.Various sources wax enthusiastic about the toxicity of Pokeweed: "All parts of the plant can be toxic and pose risks to human and mammalian health. Toxins are found in highest concentration in the rootstock, then leaves and stems, then the ripe fruit. The plant generally gets more toxic with maturity, with the exception of the berries, which are dangerous even while green... Children are most frequently poisoned by eating raw berries... Adults have been poisoned, sometimes fatally, by eating improperly prepared leaves and shoots, especially if part of the root is harvested with the shoot, and by mistaking the root for an edible tuber" (Wikipedia).We have experience with this last problem, since in the spring of 1970 our brother Paul, "the simple native," knew that either the shoots or the roots were edible. Without consulting the literature, he cooked a meal of the roots and nearly died, and he reported that the flavour was so similar to that of canned Peas that he could never eat canned Peas again. Protocols for preparing the shoots involve boiling in three changes of water, but we have not tried this.In Maryland, Marc Imlay says Poke is the native species that's planted on sites where invasive Phragmites has been controlled. Poke's spectacular growth makes this believable, and if they survive the winter, in the spring a number of this year's seedlings are going to be transplanted into our stands of Japanese Knotweed (Reynoutria japonica, or Polygonum cuspidatum) to see how this North American native grapples with an Asian invader with a similar growth form.