Showing posts from October, 2017
Show all

Crayfish Assault on the Dam at Oxford Mills 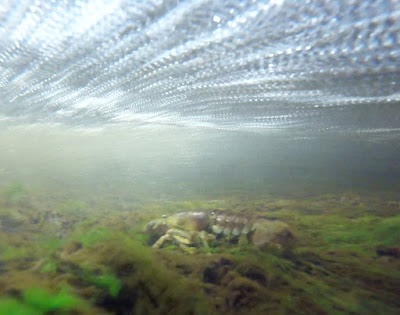 On October 3, 2017, I'd just returned from two months away from home, and Fred was eager to show me the assault on the dam at Oxford Mills, so I checked that there was still charge in the GoPro that my Dad had won by entering his "Bear Tree" video in a trail camera contest, and pulled on my gumboots.

Fred put fresh batteries in the big light, and we drove the 10 minutes north to the dam on Kemptville Creek in Oxford Mills - the site of our winter "Mudpuppy Night in Oxford Mills" project.

Water levels had finally dropped to wadeable, after being "spring flood" for the whole of this wet summer. For a few days he'd been collecting crayfish claws, legs, and carapaces, left by predators, and expected a repeat of last fall's mass migration of the hybrids - Orconectes rusticus x propinquus, rushing the dam against the spillway current as if their very lives depended on it.