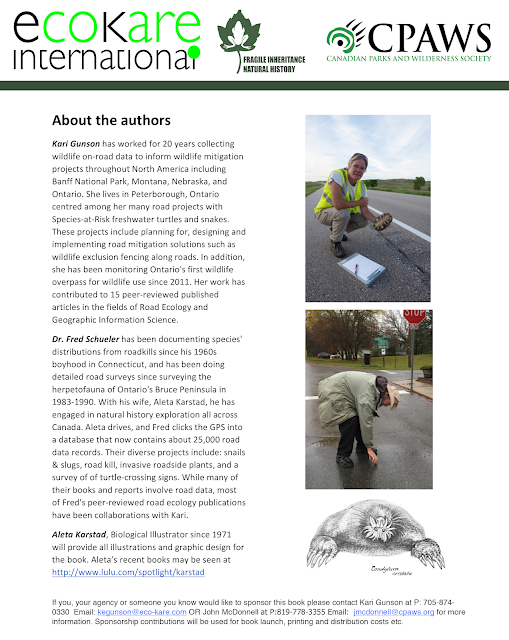 We're now working with CPAWS Ottawa Valley Chapter and EcoKare International on "Wildlife on Roads, the Handbook, towards a hoped-for release in the spring of 2018. The book is coauthored by Kari Gunson and Fred, with illustrations and design by Aleta.
While we've always been nominally grumpy about the way roads influence landscapes as "the largest human artifact," and about their enormous impact on wildlife populations and the spread of invasive plants, we still use internal-combustion vehicles on roads for our exploration of Canada. Our database currently contains 29,792 on-road records from Pelee Island to Fort McMurray, and from to Haida Gwaii to Nova Scotia (and there may more from Newfoundland and the NWT in 1970s field notes that haven't been entered).
In 1977, when we took the canoe Fairhaven Bay from Vancouver Island to Quadra Arm to fill a gap in herpetological knowledge of the mainland coast of British Columbia, we landed at an old lumber camp: we were able to pitch our tents where we were told the Grizzly Bears didn't visit, and to use a pickup truck to extend the known range of Tailed Frogs, Ascaphus truei, from just north of Vancouver to halfway-to-Alaska. 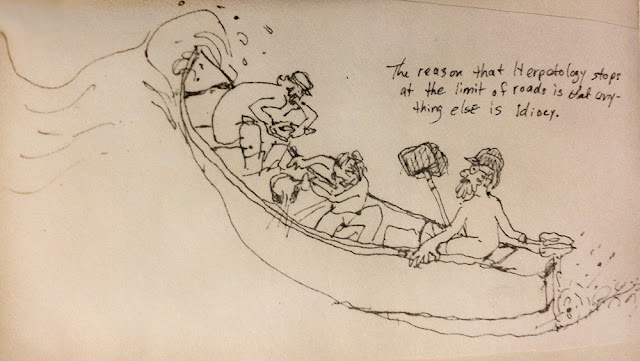 Our attempts to survey away from roads led us to coin the maxim that "the reason herpetology stops at the limit of roads is because anything else is idiocy." (in 1989, right along the Yellowhead Highway, Fred was able to extend the Tailed Frog's range to almost-in-Alaska).
On that trip for Canadian Nature Notebook we'd been doing our other road ecology thing - marking down locations (in those days odometer readings) for stands of invasive roadside Plants - the now-believed-to-be-alien, Narrow-leafed Cattail, Typha angustifolia, which has since continued its spread all across the western provinces, to the point where it dominates some marshes in Saskatchewan
Roads actively kill animals, and facilitate the spread of invasive Plants, but herpetology uses roads like physicists use particle detectors, to document both geographic ranges and seasonal movements of their species. We've long used the eddies around bridges and culverts to concentrate shells for the Canadian Library of Drifted  Material and as sampling points in surveys of streams, as we're "doing bridges."
In the 1990s naturalists and ecologists hit upon the idea that (since roads were constructed by fellow Humans) it might be possible to reduce their ecological impact by campaigning to modify the way roads were built and maintained, rather than just regarding them as inevitably destructive natural phenomena. In 1990 Fred and David Tomes surveyed the herpetofauna of the Bruce Peninsula, and while about half of their data was of road-crossing animals, their final report barely mentioned ways of reducing the slaughter - but now Kari strains her back installing fencing which keeps the Snakes and Turtles off the roads there.

In the 1980s and 1990s precise locations of roadkill had to be taken from guessing ones position on a topographic map, and this was very much facilitated in Canada by the presence of the UTM military grid on the maps, which meant that, from a 1:50:000 map, one could record a position within 50 metres. Then in 1995 Global Positioning units became affordable, and suddenly one always knew, and could MARK, one's location as a downloadable waypoint, and looked at a map mostly to see the surroundings, rather than to figure out where one was. On-line mapping resources became more and more convenient and accurate, so that it was soon possible to record a location to within a couple of metres just from a visual memory.
In 2008 a series of meetings, instigated by Dave Ireland, led to the formation of the Ontario Road Ecology Group (OREG) which has been through a series of organizational formats, and is hopefully now setting out to represent the whole road ecology community of Ontario.

A big inspiration in our move towards road ecology as a science in itself, rather than just a way of studying animal movements, has been the Geomatics and Landscape Ecology Research Laboratory (GLEL) at Carleton University, with their Friday seminars, and their mailing around of pdfs of landscape ecology papers for discussion at these seminars.
In 2008 Fred posted 'Ten Other Questions about Road Ecology' which he felt weren't being adequately addressed in the GLEL or by OREG, and in 2009 he sang the song of road ecology as a scientific dreamtime (this is made into a poem in his darwinian poems book.)
As road ecology became more of a "thing," we got involved in a number of road-centred projects. In 2004 we started "doing the streets," frequent surveys of on-road creatures and conditions on the 267 metres of streets facing land we've occupied in the village of Bishops Mills (3279 surveys to date), and in the first season of OREG Kari calculated a GIS projection of how many forest and wetland-dwelling Animals are likely to be found on every 15 metres of road in Ontario, and we tested her model on a circuit around Leeds & Grenville counties. With Kari we waypointed turtle-crossing signs (which had been erected, without - except for those done by South Nation Conservation - recording their positions), to assess their effectiveness and longevity. In 2014-2015 we worked with A2A on a survey of roadkill and possible mitigation of Hwy 401 through the Frontenac Axis.
...so when this orphaned ms popped up, we've settled down with Kari to use her experience with mitigation and policy, our experience as independent road ecologists and general naturalists, and lots of peer review by friends and colleagues, to put together what we hope will be a useful guide for a citizen scientists who want to get started in road ecology. We will be using this site, Doing Natural History as a repository for data and discussions too detailed to fit into the book, so this is just the first post focused on "Wildlife on Roads: The Handbook."